First, let's define what a Service is; in the context of this blog post, it refers to more than just the Service resource type in Kubernetes. It is talking about an exposed application hosted within a Kubernetes cluster. We might have exposed our Service internally on an RFC-1918 address range, or it might be externally facing.

The first thing to talk about here is the Azure resources that will be deployed before we can use/consume our Kubernetes cluster. Azure has a few different ways that AKS can be deployed; for the most part, the differences relate to how secure the cluster is, where secure relates to network security. Typically I describe them as follows:

In this instance, we are going to be talking about a Public Cluster implementation. As can be seen in the below diagram, we have three areas of interest to talk about.

In the Cluster Resource Group, we have deployed Azure Kubernetes Services, Azure Key Vault (KV) and Azure Container Registry (ACR). These are services commonly used together on Azure when operating an AKS environment. The AKS instance would pull any internal/private container images from ACR. And, the KV would serve as a place to store and consume any secrets that our environment might need.

The Managed Resource Group contents will vary depending on which type of AKS is deployed. In this instance, we will talk to a Public Cluster. The Resource Group itself is solely managed by Microsoft and is typically named by prefixing it with MC_ then adding the Cluster Resource Group name and the AKS instance name. To allow traffic to ingress into the Cluster, a Load Balancer (LB) and Public IP (PIP) are both deployed here, as well as a Network Security Group to manage ingress and egress traffic. The Kubernetes node pools can be either an Azure Availability Set or a Virtual Machine Scale-set (VMSS), there can also be an N-number of these node pools. We have a single VMSS backed node pool in this instance as we want the pool to scale autonomously. The final piece to this managed puzzle is the Managed Identity - this can also be a User Assigned Identity - which allows the Cluster and its resources to authenticate back into Azure.

We also consume Azure Services, these are services provided by Azure as part of the platform, and they do not live within a Resource Group. The HCP, while part of the AKS resource, does not exist anywhere visible to us as consumers, and AAD allows users and services alike to authenticate to the Cluster.

Note
The Cluster Resource Group can contain any Azure resources that your solution may require, or even just the AKS resource itself. I have selected a few resources that are commonly seen together for this example. 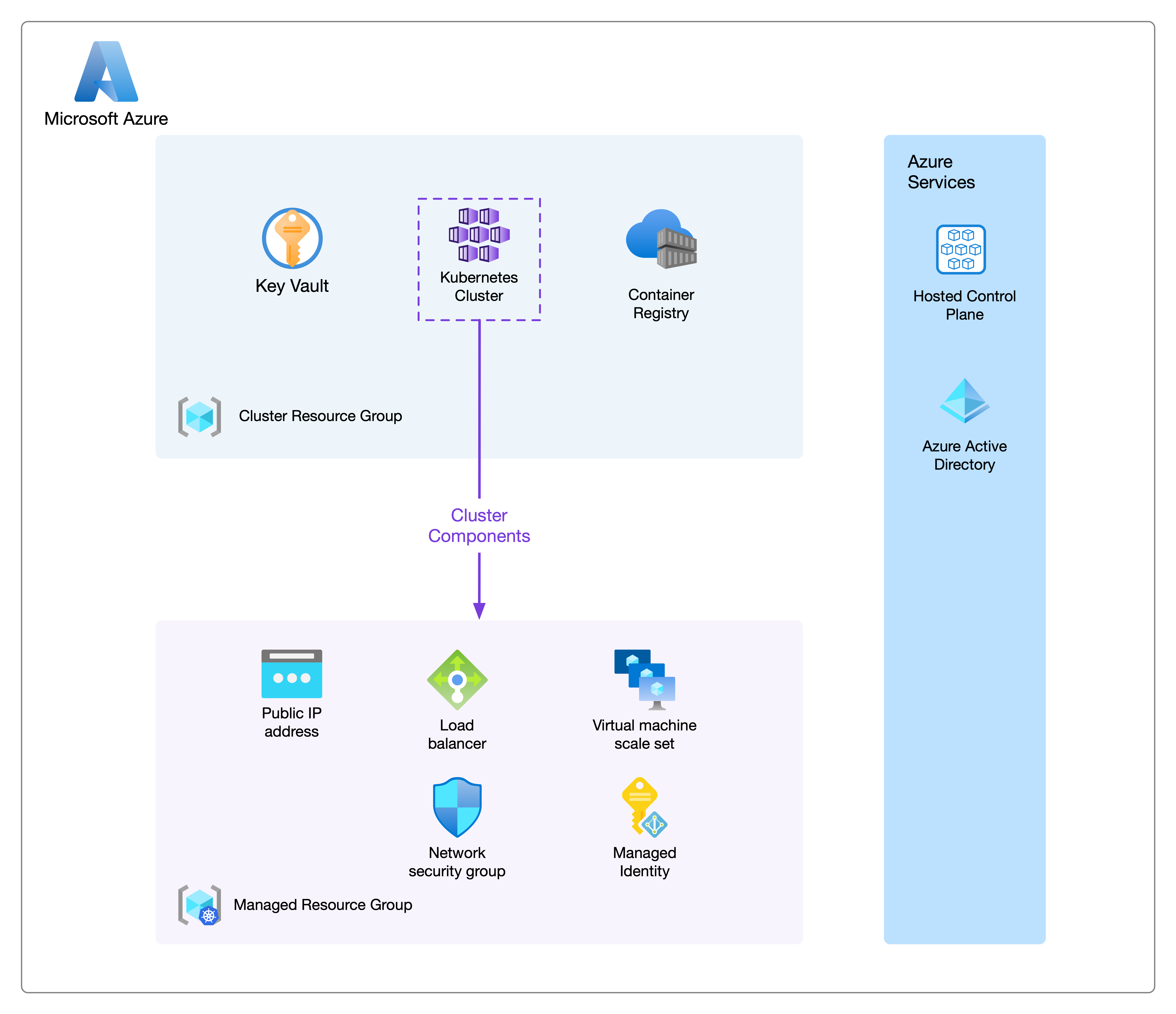 The following piece is how traffic flows into our cluster, whether Operator traffic or Consumer traffic. I quantify an Operator as someone who manages the Kubernetes cluster or the resources it contains, and a Consumer is someone who will consume an API or App hosted on our cluster. 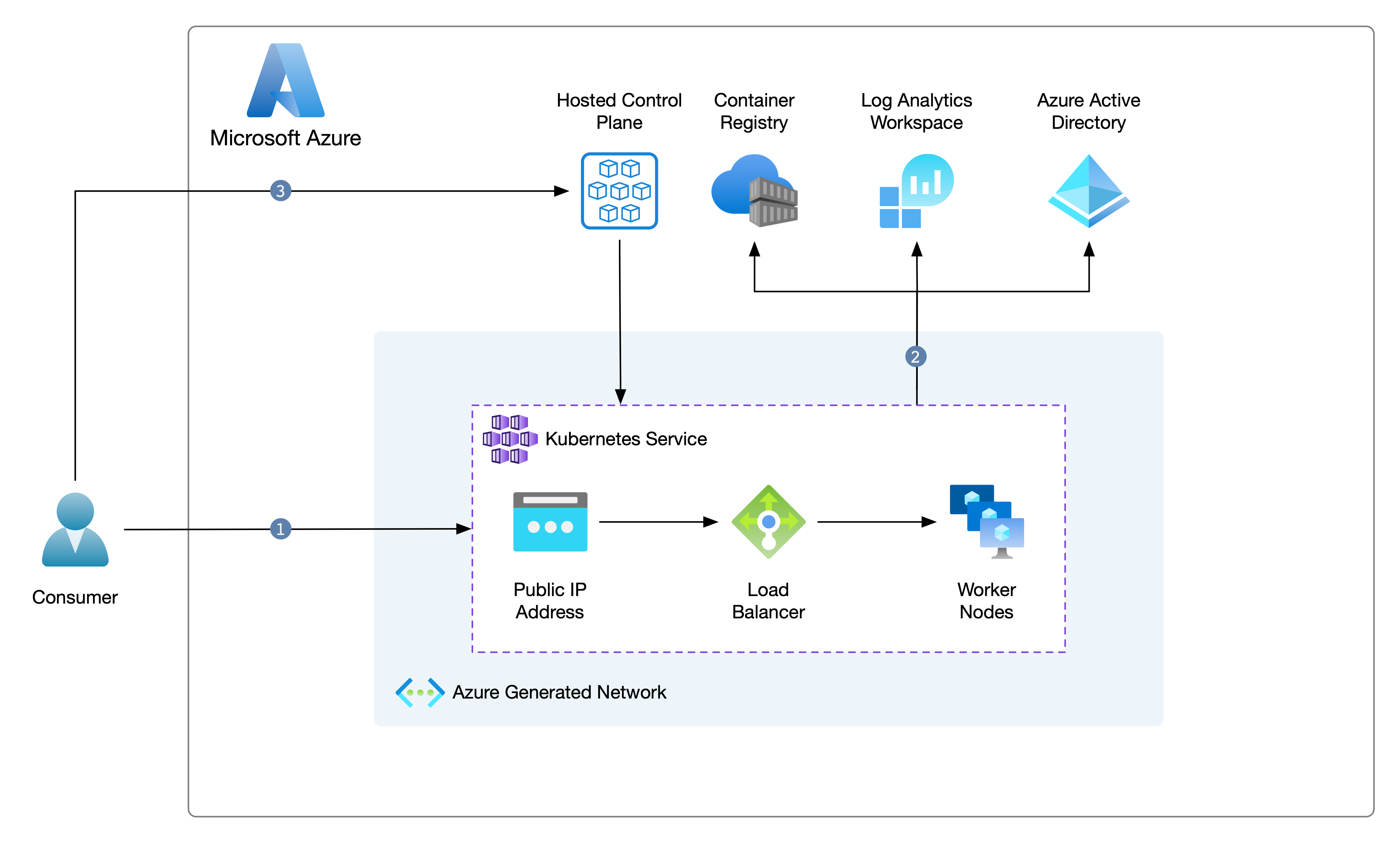 Per the above diagram, there are 3 points marked out; we will go through each.

Now that we have our cluster deployed and demonstrated connectivity to the cluster, what do the resources look like inside the Kubernetes cluster itself?

Note
The Cluster resources will look the same irrespective of where Kubernetes is hosted. These principles remain the same; this is an advantage of using technologies like Kubernetes or OpenShift. A Pod is always a Pod, no matter which cloud its underlying cluster is deployed on.

The example API that will be discussed here sorts Hogwarts students into one of the schoolhouses. This API contains a single container, and storage is static within the application.

At a high level, the Service is composed of the following elements: 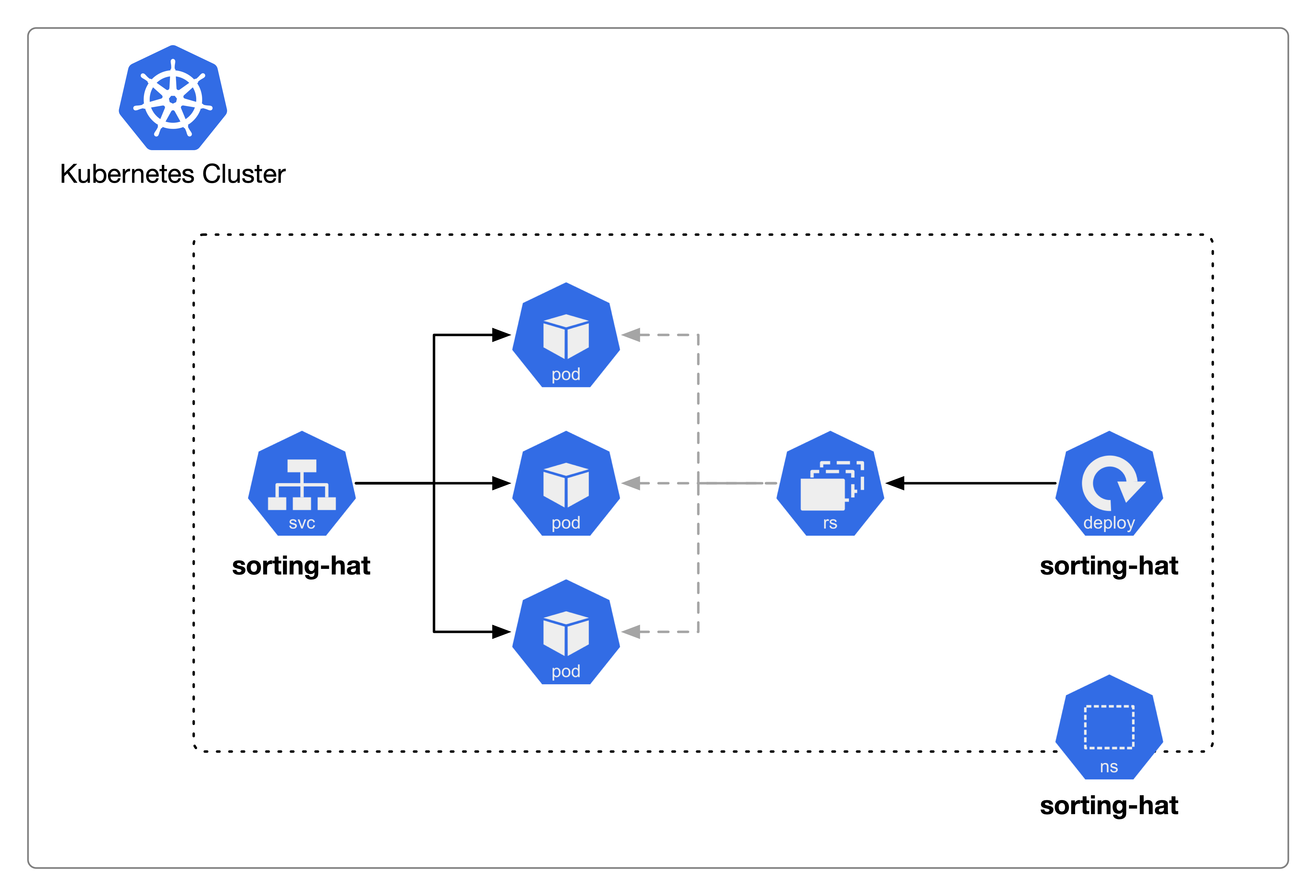 Per the above, we have a Deployment that has instructed the ReplicaSet to ensure that 3 Pods are running on the cluster. In this instance, each of those Pods contains a single Container. The Kubernetes Service will allow access to these Pods over an exposed port. This port is defined in three places; Container, Pod, and Service.

There are many other components that Kubernetes offers to cater for myriad situations; however this covers off all the commonly used services to have a Service running inside of a Kubernetes cluster on Azure!

If you're interested in learning how you could deploy a Kubernetes cluster in Azure then head over to my Kubernetes in Space - Azure post!